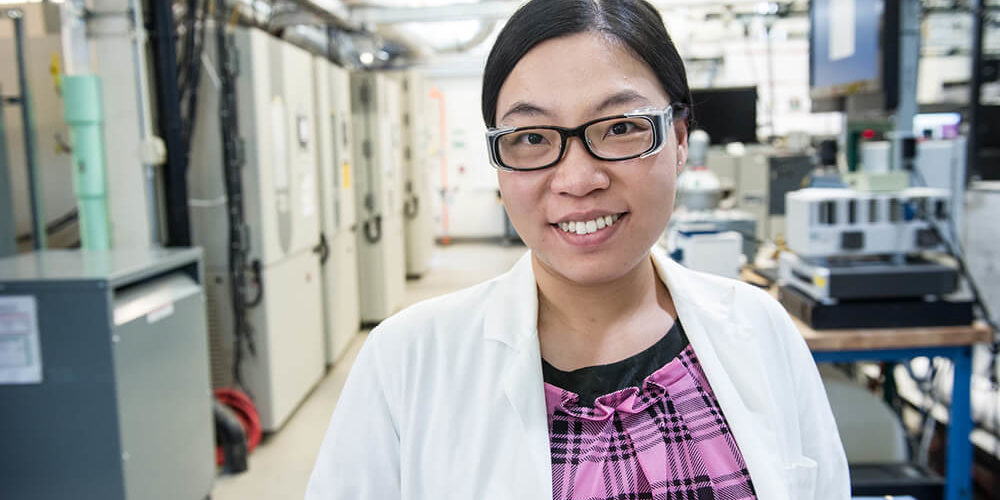 Imagine if you went to the doctor, and the only clues he or she could get about your health were your pulse and temperature. No EKGs or MRIs — just very limited information for a diagnosis.

This is, in a way, how new batteries are tested after manufacturing. They are hooked up to electrodes and their output measured.

But like an MRI, what if sound waves could be used to see inside batteries? What if cell manufacturers could detect internal physical defects and use that to predict a battery’s longevity?

That’s what Berkeley-based Feasible, Inc. hopes to accomplish with its ultrasound-based hardware-software diagnostic system, which will be tested at NREL as a part of the Shell GameChanger Accelerator Powered by NREL (GCxN). NREL Battery Control Engineer Ying Shi is one of the four lead researchers working on the inaugural cohort of GCxN. As a battery-system engineer, Shi was excited to help Feasible test out its diagnosis system, which uses acoustics to detect battery degradation.

“We haven’t yet done research on this technology at NREL,” says Shi. “It will be very interesting to carry out the project with them, and see if they can utilize the results to further improve their diagnostic capability.”

Over the past six years, Shi’s research at NREL has examined next-generation battery-management systems, primarily for vehicles, through testing and analysis to develop lifetime-predictive models. She came to the Energy Storage Group at NREL’s Transportation and Hydrogen Systems Center after an experience in grad school that got her hooked on vehicle batteries.

“My advisor at Penn State happened to have a project on lead-acid batteries on electric trains,” says Shi. “That was so interesting and that’s how I got interested in controls.”

Shi, who now works primarily on lithium-ion batteries, found out about the Shell GameChanger opportunity at NREL when her manager emailed her. Shi was already leading another project with Shell, testing and modelling battery degradation for grid storage, and this Feasible project seemed a natural alignment.

So far, Feasible has been able to test its technology and modeling only on pouch batteries. These are small, flexible batteries, usually lithium-polymer, used in lightweight applications like drones. To test them and predict their lifespan, researchers attach sensors to both sides of a pouched cell to detect physical deformations if they exist. They then correlate that with physical degradation of the cell and run a model to see its degradation rate and lifespan.

But working with NREL will allow Feasible to try out their technology on large-format batteries, which is what commercial applications like EVs require.

For Shi, one of the other exciting things about ultrasound technology is that it can be used not just for specific lithium-ion chemistry, but also for pouch cells in general regardless of their chemistry – an important factor, because so many emerging chemistries are now being raced to market.

Assisting on the GCxN project also allows Shi to work closer to the customers and to try to speed technology to commercialization.

“Working with Feasible’s founders, their concern is more about what the end customer wants,” she says. “It’s different from my day-to-day work at the lab, where we look at having crazy ideas… We ask, can we take a crazy idea and make it feasible?”