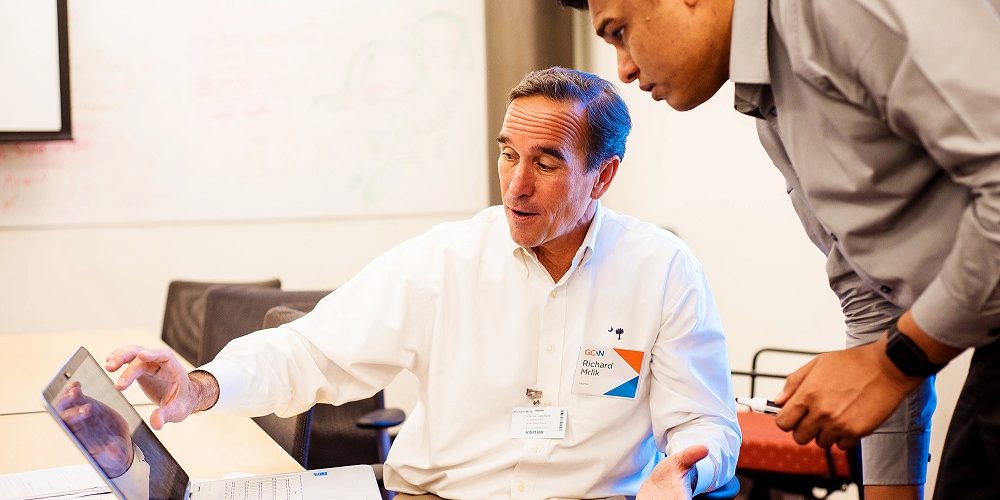 Clean energy entrepreneurs are always looking into the future and making best guesses at what the world will look like. It is an act of imagination as much as knowledge, and the stakes are high.

Intertie Corp. is such a company. An electric vehicle (EV) charging company based in California, Intertie is one of the Shell GameChanger AcceleratorTM Powered by NREL (GCxN) startup companies in the Electric Vehicle Fast Charging cohort.

CEO and founder Richard Mrlik sees a future in which EV charging is ubiquitous – a commodity that drivers have come to expect. As a commodity product, a charger only has two ways to pull in customers: via the two Cs of cost and convenience.

Thanks to a concept called battery-boosted charging, Intertie’s charging station (called the EV ChargePod) is a technology that can offer both.

Although the concept has been around for a few years, battery-boosted technology is a significant departure from the way that commercial EV fast charging is done now.

Currently, the vast majority of chargers in the United States pull directly from the grid using an AC connection. The EV ChargePod designed by Intertie improves on this approach, including a DC microgrid and a battery pack buried underground, to better manage that energy flow.

It is this design, developed in Intertie’s product realization lab in San Francisco, that allows it to address these two Cs.

The design benefits from their core multi-disciplinary team of five.

Richard Mrlik is an engineer who has spent his career building and operating energy projects, and his son Zander Mrlik leverages his investment banking experience to create project finance solutions. Their CTO, B.C. Broussard, has been a founder and CTO at a diverse set of startups and is responsible for building the Intertie energy management and digital platforms; Todd Judd and Eric Sande are, respectively, licensed electrical and low voltage professionals, doing the design and deployment of field-ready technology.

Intertie got its start in 2016, when Richard was completing a large solar energy project in City of Industry, California, that included a buildout of 60 charging stations. He found that adding a bank of EV chargers was surprisingly expensive, both to run and install.

Bringing the cost down would require overcoming demand charges. Because chargers now on the market pull from the grid, they are subject to demand charges that utilities can impose at high-demand times – raising the cost to operators and consumers.

“The lightbulb went off,” Richard said. “We could decouple charging from the grid using battery storage to considerably reduce installation and operating costs.”

Of course, it is one thing to say this – and another thing entirely to do it. There were engineering challenges aplenty for the team to work on: embedding firmware on all devices on a DC microgrid, developing underground battery technology, writing optimization software, designing the modules, and much more.

But to locate a system to boost power for EV charging, none of these setups are convenient. So, the team decided to move the battery underground.

Drawing from extensive utility infrastructure experience, Intertie’s team knew that undergrounding storage would be challenging, but well worth it.

The initial enclosure design weighed in at 8,000 pounds – not the modular, scalable installation the company sought – so the design team optimized the design, slimming it down to around 1,000 pounds.

Some aspects were simpler; turns out, burying a battery has some advantages. Soil around the battery acts like a thermal regulator, which extends battery life.

After about four years, the Intertie team has a product and a project financing model that is ready to roll out.

Their initial customer base, said Zander, will be property owners that want to attract shoppers or provide charging to tenants.

“Property owners don’t want a big battery sitting in their parking lot. We’ve got to put all of this in a place where its esthetic and it takes up a very small footprint,” said Richard.

The other key factor: property owners do not have to pay a dollar for the installation.

This is the contribution of the project financing expertise from Zander, a former investment-banker-turned-entrepreneur. The project development model that Intertie has come up with involves multiple revenue streams, including selling solar energy and grid services.

Penciling out that math is how NREL comes into play, said Zander. Working with research engineer Rishabh Jain in NREL’s Power Systems Engineering group, they are testing additional revenue sources from the grid and optimizing the energy management system to maximize value.

It takes an eco-village

Collaborations have been critical for Intertie.

The company had to rely on the trust of a few committed partners early on, including supply chain partners who took risks, the California Energy Commission’s CalSEED and the VC firm True Ventures.

It helps that the collaborators all share the same vision of the future, says Zander.

“Pitching a hardware-software clean energy venture is not an easy pitch right now,” said Zander. “True Ventures has been really loyal since the beginning. They jumped in and their backing has really helped us early on.”

The company will be rolling out its first projects in 2020.

Learn more about the company at its website: www.intertie.com.

The Electrical Panel that Makes Solar and Storage Simpler and Cheaper to Install
April 9, 2020

Startup Hygge Gets Cozy with the Future of Energy Storage
March 10, 2020
Recent News
Go to Top