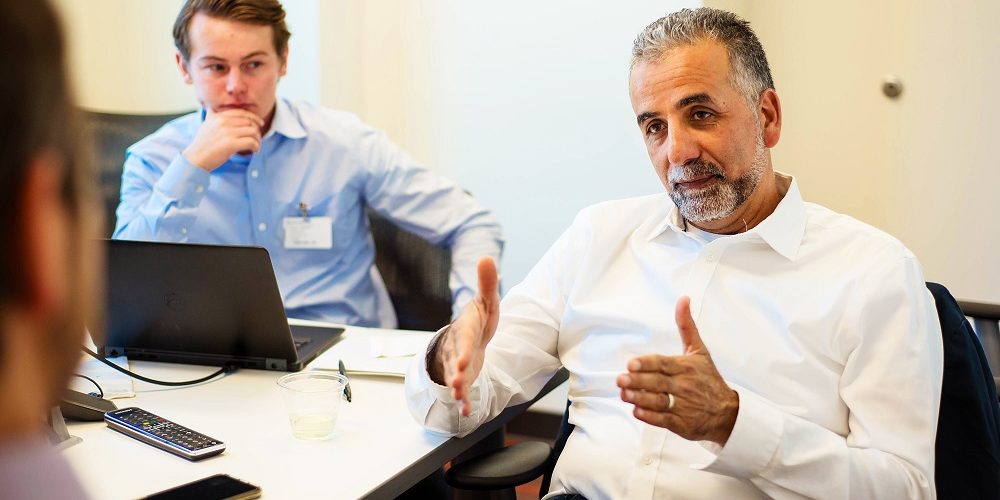 Although the Shell GameChanger AcceleratorTM Powered by NREL (GCxN) program is still relatively young, NREL and one GCxN company have a relationship that goes back more than ten years.

Based in Chicago, AllCell Technologies specializes in making batteries safer and more cost-effective through passive thermal management. It makes lithium-ion battery packs with a patented phase-change composite (PCC) material that keeps the cells cool during operation.

But its PCC technology did not develop overnight. In fact, AllCell’s story demonstrates that bringing cleantech hardware to the customer can take years, even decades.

Although the company is very much in operation now – deploying its batteries in electric planes, commercial drones, and autonomous shuttles, it had to wait for industry to catch up before demand for its PCC technology developed. Many safety considerations had to be addressed before advanced battery technology and electric vehicles became common.

It Started with the Army

AllCell’s PCC material developed out of research that co-founder Said Al-Hallaj did for his Ph.D. in chemical engineering at the Illinois Institute of Technology (IIT).

In the 1990s, a group of researchers at IIT were working with the U.S. Army Research Office on the Power Pack for the Soldier of the Future project. The idea was to develop a lightweight, portable battery to be used in extreme weather conditions, and Al-Hallaj was part of the team working on lithium-ion batteries as one possible option. The team was led by the other AllCell co-founder ,Prof. J. Robert Selman.

Al-Hallaj and his co-inventors developed the PCC material that could solve one of the most important problems with this new generation of batteries: overheating, which can cause catastrophic thermal runaway and fires.

The PCC material takes advantage of the unique physics of a phase change, the term for when a material goes from solid to liquid or to gas. At this inflection point, some materials can absorb an unusually high amount of heat (i.e. latent heat).

When included in a battery pack, the PCC material is wrapped around each cell, insulating each one like an egg carton cradling eggs. AllCell’s insulated battery packs are coupled with power electronics as part of the battery management system.

“We’re your insurance policy against battery fires,” said Al-Hallaj. “In the development of the EV industry, this is a critically important point. Fires at fast-charging stations could kill this industry, if their effects caused EVs to be perceived as unsafe.”

But why did it take so long for a material invented in the 1990s to make its way to the market?

AllCell brought its material to NREL in 2008-2009 and worked  with Ahmad Pesaran, chief energy storage engineer for NREL’s Center for Integrated Mobility Sciences, for the first tests of the prototype. But then they had to wait for the rest of the industry to catch up.

The wait had to do not with the PCC, but with the price of the lithium-ion batteries themselves. Li-ion battery technology was very expensive and inaccessible until quite recently, so there simply wasn’t enough market demand for AllCell’s “cool by design” material.

During the intervening years, Al-Hallaj founded another company called NETenergy to build thermal storage systems for commercial buildings. NETenergy worked with GCxN’s sister program, the Wells Fargo Innovation Incubator (IN2), on developing its AC cooling technology with the help of NREL expertise and facilities.

Now with the continued rise in electric mobility and ongoing improvement in lithium ion battery affordability, AllCell is working with NREL again, this time with another Center for Integrated Mobility Sciences research engineer, Chuanbo Yang.

The team will be testing the properties of the composite and battery management system to see how they best fit with fast-charging stations.

They will also be running techno-economic calculations to see where the technology fits in the marketplace: who would be interested in buying, what justifies an investment in their composite, and what the competing technologies are.

“As an entrepreneur, unbiased third-party validation has always helped us to answer questions in the marketplace, to evaluate what we have before we go out and make claims,” Al-Hallaj said.

And this relationship with NREL has truly helped AllCell develop its material, over many years. It’s a unique role that NREL plays in the clean energy economy, he said.

“The giant auto manufacturers have billions of dollars and can do this kind of testing in-house. We can’t, and that’s why national labs are important,” said Al-Hallaj. “We’re a small business. We want to grow but we cannot continue to invent new materials. National labs can help people like us – smaller companies with a good idea, who want to optimize it for best-case business conditions.”

The Electrical Panel that Makes Solar and Storage Simpler and Cheaper to Install
April 9, 2020

Startup Hygge Gets Cozy with the Future of Energy Storage
March 10, 2020
Recent News
Go to Top