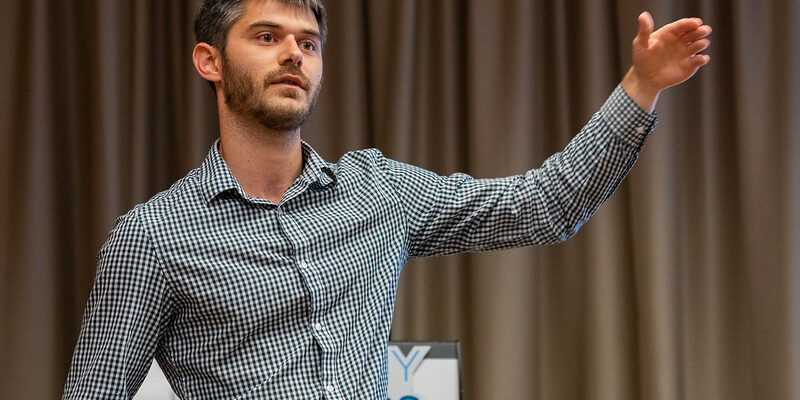 Before joining GCxN, NREL transportation researcher Matt Moniot did not appreciate how mysterious the life of a bus could be.

Moniot is an NREL specialist in the electrification of cars and other small vehicles. His work focuses on emergent uses, like taxis, ride-hailing vehicles (Uber/Lyft), and autonomous vehicles.

Matt’s research is already complex stuff, but joining GCxN this year exposed him to a whole new world: that of the transit agency.

As research partner for the startup Microgrid Labs (MGL), Moniot is helping develop software for agencies electrifying their fleets.

About a third of the 70,000 transit buses in the United States are operated by agencies that have pledged to go electric. But there are simply not enough tools to help agencies answer myriad questions, such as how many buses to buy, where to put the chargers, which routes should host the electric vehicles.

It’s not a one-to-one trade, and the stakes are high.

“This can be an $800,000- to million-dollar purchase for a transit agency, and without the right specifications, that purchase might not pan out,” said Moniot.

What’s the Life of a Bus?

Every transit agency is different. Every city has its own agency, and they are all run with different levels of data and different management philosophies.

“Buses can go from one route to another route. Each day, the life of a bus can be very different, and sometimes even operators have no idea of the history of a bus,” said Moniot. In addition, there are significant gaps in the data.

Does the bus have to go up and down hills? Does it chug through Wisconsin winters or Louisiana summers? In order to plan, agencies need to model all these factors.

With Moniot’s help, Microgrid Labs is building sophisticated modeling into its software, called EVOPT, to tell transit agencies how to electrify effectively with better data. It includes code developed at NREL’s Center for Integrated Mobility Sciences, within a modeling program called FASTSim.

“It’s our mission at NREL to develop tools that are useful to industry and academia,” said Moniot. “FASTSim is one of the only free and open-source powertrain models out there.”

As a team member developing FASTSim, Moniot first met the Microgrid Labs team when they emailed NREL’s help desk. He answered queries that helped them build off of the NREL code. When MGL was accepted into the GCxN program, Moniot signed on to continue the work.

Most information about transit buses comes from relatively simple data collection. Loggers now collect data on some basic stats: where buses are, and how fast they are going.

To more accurately predict the energy needs of a bus, though, the MGL research team has created bigger and better data loggers – “very skunkworks stuff,” as Moniot says, the prototypes stuck into Otterbox cell phone covers. “That’s the cheapest way we could do it,” he says.

The project is currently testing the prototype data loggers with a transit agency in Boulder County, Colorado, for some trial runs.

The agency, Via Mobility, serves a population with limited mobility. Since the buses run on routes covering the Denver-Boulder area, the data loggers will be able to more closely model hills and slopes that inform a bus’ energy requirements.

With more information about terrain, MGL should be able to tell transit agencies how best to deploy their buses.

With all GCxN projects, the research done in conjunction with startups feeds back into the knowledge base of the larger lab. The pairing of researchers and startups helps NREL, which can shape its research and commercialization strategies with more awareness of what’s going on in the market.

For Moniot, specifically, working on the MGL project has opened his eyes to the challenges faced by transit agencies around the country, both technologically and also economically, as they electrify.

“Transit agencies are more than just a collection of big vehicles. It’s a whole other way of operating,” he said. “Each one is different, with its own philosophy and ambitions about electrification.”

“It’s this Wild West of low funding, but with a really important mission of coverage to communities. I’m glad I’ve been able to participate,” he says.